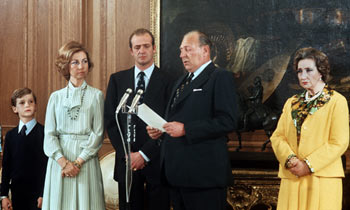 Don Juan Carlos turns 84 this Wednesday, away from Spain, in Abu Dhabi, where he has lived since August 2020. Throughout his life he has witnessed and starred in many historical events starting from his birth and arrival in Spain.

On January 5, 1938, the second son of Don Juan de Borbón y Battenberg and Doña María de las Mercedes de Borbón y Orleans was born in Rome. After the abdication of King Alfonso XIII and his eldest son, Don Juan became head of the Spanish Royal Palace. Don Juan Carlos was educated mainly in Spain, where he arrived for the first time at the age of ten, coming from Estoril (Portugal), where the Princes of Barcelona have lived since 1946, and after their apprenticeship in Fribourg (Switzerland). In the picture, the Counts with his four children. From left to right: baby Alfonso, who died at the age of 14; and Juan Carlos; Infanta Pilar who died in January 2020, and Infanta Margarita.

The King was baptized on 26 January 1938 in the Chapel of the Order of Malta in Rome by Cardinal Secretary to the Holy See, Eugenio Pacelli, who would become Pope Pius XII. His paternal grandmother, Queen Victoria Eugenia, was his godmother, and his maternal grandfather, Carlos Tancredo de Borbón-Dos Sicilias, prince of the Two Sicilies and the Spanish infanta, his godfather.