Surely you have heard the term Big Data or the data era. This, which may seem like something out of science fiction, is much more present in our everyday lives than we might think. The value of data is critical for large companies, but also for specific areas like football or Formula 1. While we still have a long way to go, the reality is that in many segments, data is taken to the extreme. Street. Next we will learn more about telemetry or secret Formula 1 data that is used to increase the car’s performance to the maximum.

In this case we will focus on lenovo. To do this, we have to go back to March this year when Formula 1’s association with a Chinese company was announced to bring its cutting-edge technology into its operations. For several years, the experience of this company will be used in base and field operations at the races. High-end computing hardware and solutions will be used as servers.

With this alliance with a company that specializes in information technology, Formula 1 shows that the interest in data is not a fad. And it turns out that behind a race broadcast or data collection, there is a lot of technology. Without going any further, at the Spanish Grand Prix held in Barcelona, ​​70 kilometers of optical fiber was deployed to link all systems so that all information can reach the UK in real time, where it is all processed. Here alliances with technology partners are very important.

And, while television broadcasting is something that has never been seen before and is a challenge to technology, the reality is that the big revolution in Formula 1 is data. Years ago, each team had its own telemetry system, but now the Technology and Media Center is working with the team. With them, they have signed an agreement in which they promise not to share this data. Some data may be published in broadcasts, while others are confidential. Roberto Dalla, director of the F1 Center for Technology and Media, joked with the press about it saying that «can become millionaires if they sell all the data they receive from each car to another team«. 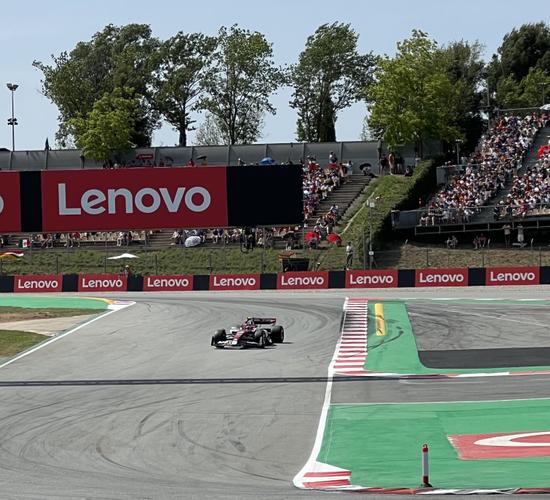 Sensors that measure engine vibration, sensors that measure slip angle, pressure exerted by the car … in total, the car has between 300 and 400 sensors that collects information. It is estimated that they gathered approx 35 megabytes of data per round, achieving between 750 GB and 1 TB of information in each test performed. All of this is processed and analyzed by engineers to make modifications to the car or simply to start planning for the next season.

Technology and precision sports go hand in hand and not only do they help improve the functionality of everything, they also help make shows much bigger. In the case of Formula 1, Lenovo estimates that the races are seen by more than 300 million people worldwide and their presence places them as one of the leading technology companies in the world.