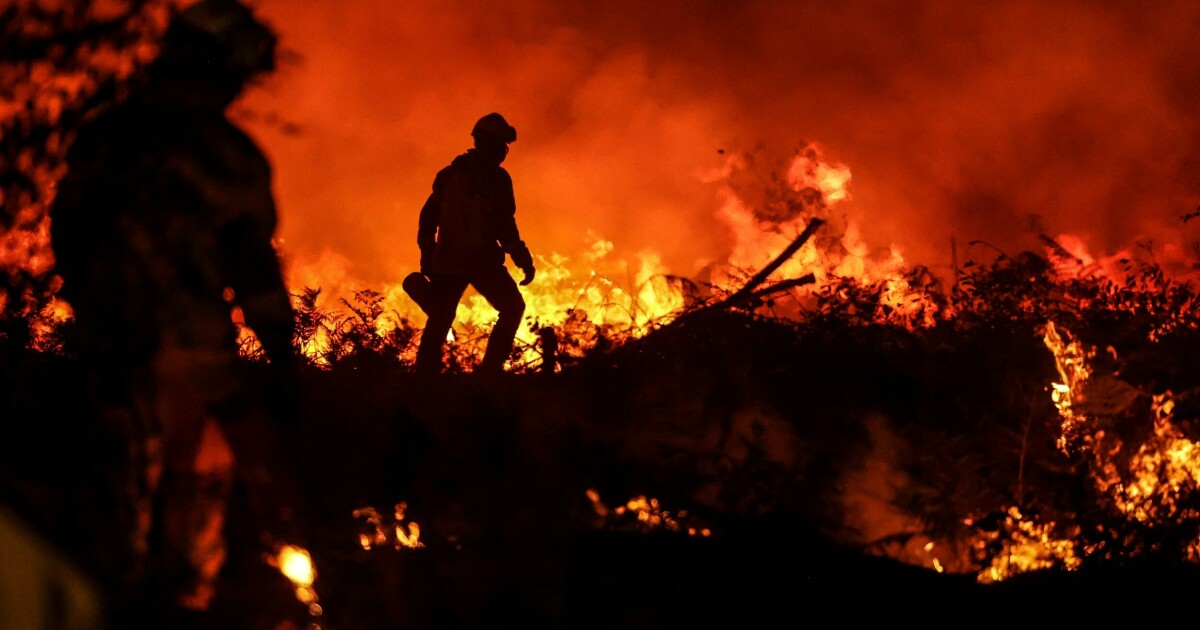 Temperature extremes continue to hit much of Europe, and western France was among the hardest hit this week.

Temperatures could hit record levels in 15 areas in the southwest and thousands of people have been forced to flee.

Forest fires in France in recent days have forced more than 24,000 people to flee. In some places, emergency shelters have been set up for the refugees.

Gironde, a popular tourist area in the southwest, was particularly hard hit. Firefighters are struggling to contain the blaze which has destroyed more than 140 square kilometers of land since last Tuesday, according to the BBC.

Journalists from several international newspapers were escorted last week into the forest in the direction where the fires are now burning most severely.

– At first you can see a cloud of smoke hanging over the forest, but everything seems relatively under control.

– But the further we go in, the worse, says BBC reporter on the spot, Jessica Parker.

Subsequently, Parker reported a massive fire and determined firefighters on the scene.

– Suddenly there was an endless fire along the roadside. The trees are burning. Firefighters along the route are trying relentlessly to deal with the most serious fires, says the BBC’s Jessica Parker.

Jean-Luc Gleyze, president of the Gironde region, told the BBC that fires continued to increase in La-Teste-de-Buch and Landiras due to the hot and windy weather, making it difficult for firefighters to extinguish them.

– They have to fight this fire that grows and grows, sometimes it also gets very high, he said.

– Several villages had to be evacuated, he added.

Many countries are affected

The heatwave in southern Europe has grave consequences for residents of the hardest-hit countries.

In Spain and Portugal, more than 1,000 deaths have been linked to heat in recent days, according to the BBC.

Temperatures in Portugal hit 47 degrees on Thursday – a new record for July. A third of the landmass is still exposed to extreme fire hazard, according to the IPMA national meteorological office.

– This is because of severe or extreme drought conditions everywhere, says BBC Portugal correspondent Alison Roberts.

A heatwave has also hit Britain in the past week, and the country’s meteorological agency, The Met Office, has extended a hazard warning to life and health as temperatures can rise to more than 40 degrees in some parts of the country.

Health authorities are “pushed to the breaking point”, according to the newspaper Independent.

Thus, the meteorological authorities have issued a red hazard warning for the first time. Hospitals and ambulance services have declared black alarms – the highest level of preparedness in the country.

Several heatwaves have hit Europe in recent weeks, and some believe that this may become the norm in the years to come.

– Heat waves become more frequent, more intense and last longer due to human-caused climate change. The world has warmed by about 1.1 degrees since the industrial era began, and temperatures will continue to rise as governments around the world make sharp cuts in emissions.

This is what Enrique Sanchez, dean of the Faculty of Environmental Sciences and Biochemistry at the University of Castilla-La Mancha in Spain, told the BBC.

– In the long term, in the following years it is possible that the temperature will not increase. Heatwaves will become more and more common across Europe, he said.