Europe increases its exports by 75% 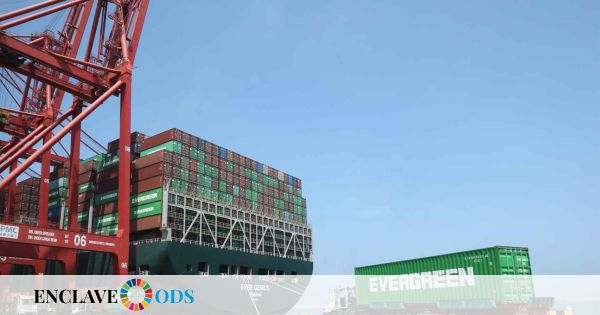 Earlier this month, and as this same section first reported, thousands of tonnes of toxic waste arrived at the port of Seville. The international movement of these hazardous substances raises questions what is the international community doing to prevent this kind of practice? which ultimately affects developing countries.

Recently Sri Lanka sent the last shipment of the total 263 trash cans returned to Englandafter the authorities found tons of plastic in the. This waste has arrived in the country illegally between 2017 and 2019.

The export and import of waste, of almost all types, is law in accordance with current international agreements. The main legal instruments and which form the basis of community and national legislation are Basel Convention on the Control of Transboundary Movement of Hazardous Waste and Their Disposaladopted in response to public protests in the 1980s over the discovery of deposits toxic waste in developing countries from abroad.

At that time, it was meant to build systems to minimize and reduce the cross-border movement of hazardous waste. Accordingly, minimum standards are set, based on approval and environmentally sound management (ERM), for the transfer of hazardous waste.

Added to this document is an amendment, the Prohibition of the Basel Convention, in force since 2019, which binds OECD and EU countries to prohibit the export of hazardous wastes to other countries, particularly to developing country.

The export and import of waste, of almost all types, is legal under international treaties

Most countries in the world, the European Union and the OECD have based their hazardous waste management laws on the agreement to form a complex legal framework characterized by inefficiency.

“The problem of international waste shipping is too complicated. There are many laws that apply and each type of waste is regulated in a different way. It really depends on the country of origin and the country of destination,” explains Sara del Río, a toxic waste expert and head of the Program on Democracy, Peace and Power Dynamics at Greenpeace Spain.

That Spirit this international instrument has been diluted. European legislation, for example, considers the transfer of hazardous wastes, in the implementation of the Basel Convention, in Regulation 1013/2006. Some of the conditions are changed in October 2020 in response to China’s shift in its control over imports of plastic waste.

“The problem of international waste shipping is too complicated,” said Sara del Río of Greenpeace

Last November, the European Commission published a Proposed Regulations to amend the current Community law on waste trading with the aim of: facilitate the delivery of waste for reuse and recycling in the EU; ensure that the EU does not export its waste problems to third countries; and combating illegal waste shipments.

That commission proposal including conditions chapter 21that fulfills frontal opposition from European Waste Management Association (FEAD). This Article, with regard to public access to waste transport notices, stipulates that the competent authorities of the sender or destination must make available to the public, by appropriate means, information about the delivery notices to which they have consented or to which they have objected”.

From Europe to Europe (and to the world)

In Europe, the principles self-sufficiency and, above all, from proximity for the trash trade. These are ideas which, expressed in Waste Framework Directive year 2008, is to guide the policies of the EU and its Member States in this regard.

Since 2004, there has been 75% increase in exported waste. However, there is a larger volume of commercial waste within the European Union’s sovereign boundaries: it is transferred almost 70 million tons per year. The case of Montenegro is very paradigmatic, which then and now also transfers toxic waste to Spain.

In 2020 the EU exported approx. 32.7 million tons of waste to countries outside the EU

In 2020 alone, the EU exported approx 32.7 million tons of waste to countries outside the EU and imports about 16 million. That year, most of this waste was sent to Turkey, India, the UK, Switzerland, Norway, Indonesia and Pakistan.

The trade in waste can have a positive economic and environmental impact if it is ultimately recycled, but provided that its management is controlled and sustainable. If this is not the case and there are no strict laws in the destination country, it could result in catastrophic and irreversible in most cases for the environment and public health.

In importing countries, Turkey takes the lead, having received about half —13.7 million tonnes—of the total waste. most, some 11.8 million tons is iron waste, but there is also plastic. According to data collected by Greenpeacethe amount of plastic waste arriving in Turkey from the EU is 659,960 tons, about 241 shipments.

In this regard, the director of the European Environmental Office’s Circular Political and Economic Integration director, in his statement to Recycled Magazinesaid that “sending waste outside the EU is not just an unfair delegation of obligation to manage our own waste and barriers to prevention.

Generally, in order to ship waste to another country, the exporter must first trash catalog. Then indicate whether it is intended for disposal or for recycling or recovery. Based on these criteria, the importing country determines its own limitations and peculiarities for your identification and authorization.

In 2019, the Conference of the Parties to the Basel Convention decided restrict international trade in plastic waste, adopted various amendments. For its part, the European Union has taken a step forward, with its decision to do not send this type of waste to countries that are not OECD members.

According to environmental organizations Greenpeacewho has denounced this bad practice for several years, “the only possible control in practice is physically controlling the container at the port and because of the high volume, it almost never happens. The most common scam is to set a different code to waste, thus implying fewer restrictions on its exports.”

In this sense, the delivery example is more than 280 containers waste illegally exported to Tunisia in 2020 from Italy. As stated, the container was full of household waste, but Tunisian authorities found that it contained plastic waste for recycling.

“The issue is no longer that these residues are government-approved and authorised, but rather that they are well characterized and that the residues they say are coming, effectively, which comes and no more pollutes”, Del Rio shows.

For an exporting country, it seems that very expensive to manage plastic waste. For that, one way to release it is to transfer it to another country. Most exports of waste – including plastics – are approved and legalized, “but it is difficult to ensure that everything is properly organized,” they explain from Greenpeace.

“There are regulations like that. too complicated with little facility to control and supervise that it is done right. Fraud is the order of the day. The export of illegal waste continues,” concluded the expert.