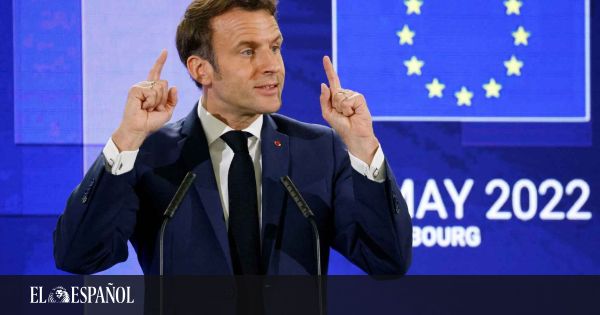 French President, Emmanuel Macron, declared himself on Monday in favor of the European Union agreeing “by a qualified majority” to most of its political decisions. For this, “it is clear that the treaty must be reformed” and abandon the unanimous rule that, in fact, grants veto power to each of the 27 member states.

Prime Minister of Italy, Mario Draghidefended the same procedural changes a week ago: “Institutions passed down by our predecessors in recent decades have served Europeans well but inadequately in the face of the realities we have to face today. We need a pragmatic federalism that covers all regions impacted by the transformations taking place in the economic, energy and security fields (…) If it is necessary to change the agreement for this, let us go forward with courage and confidence”.

The two leaders revealed willingness to sponsor what will be an important change in EU decision-making procedures before the European Parliament, meeting at its headquarters in Strasbourg. The European Parliament has included a unanimous waiver among its latest proposals for a Conference on the future of Europe, which closed Macron as the rotating president of the Council.

In the same sense, the president of the European Commission stated, Ursula von der Leyen, who traveled to Budapest on Tuesday to try to convince Hungary’s president, Viktor Orbán, to stop challenging the new sanctions against Putin. A practical case that clearly illustrates the paralysis implied by the rule of unanimity.

Draghi is more precise than Macron: “We have to overcome the principle of unanimity that leads to the logic of cross vetoes and making decisions by a qualified majority. A Europe that is able to make timely decisions is more credible to its citizens and to the world.”

Ursula von der Leyen, Roberta Metsola and Emmanuel Macron, during the Conference on the future of Europe.

The former president of the European Central Bank exemplifies (poor) coordination on defense issues, where EU countries invest three times as much as Russia and operate with 146 different systems, compared to 34 used by the United States, the undisputed superpower.

Macron wants next EU summit to discuss treaty revisions and encourage conventions with “clear goals”. However, he admits “disagreement”, a euphemism that hides that 13 of 27 is against the idea. They are Poland, Romania, Czech Republic, Bulgaria, Slovenia, Croatia, Malta, Sweden, Finland, Denmark, Estonia, Lithuania and Latvia.

The French president, in his first speech after serving for his second term, announced another initiative, the creation of the “European political community” in which Ukraine will be integrated during the “years and even decades” that the EU accession procedure takes place.

Macron is careful to present his ideas in a positive light and denies promoting a “multi-speed Europe”. The community “will enable democratic European countries that share our values ​​to find new spaces for political cooperation, security, energy cooperation, in infrastructure and transport and the movement of people.”

As usual, Macron soon traveled to Berlin where he appeared with Chancellor Olaf Scholz before the press. The German leader found the French initiative “interesting” and the two promised to discuss it with Ukraine’s president, Volodimir Zelenski.

Macron specified that the political community would be open to countries like the UK, which left the EU’s common institutions after Brexit.