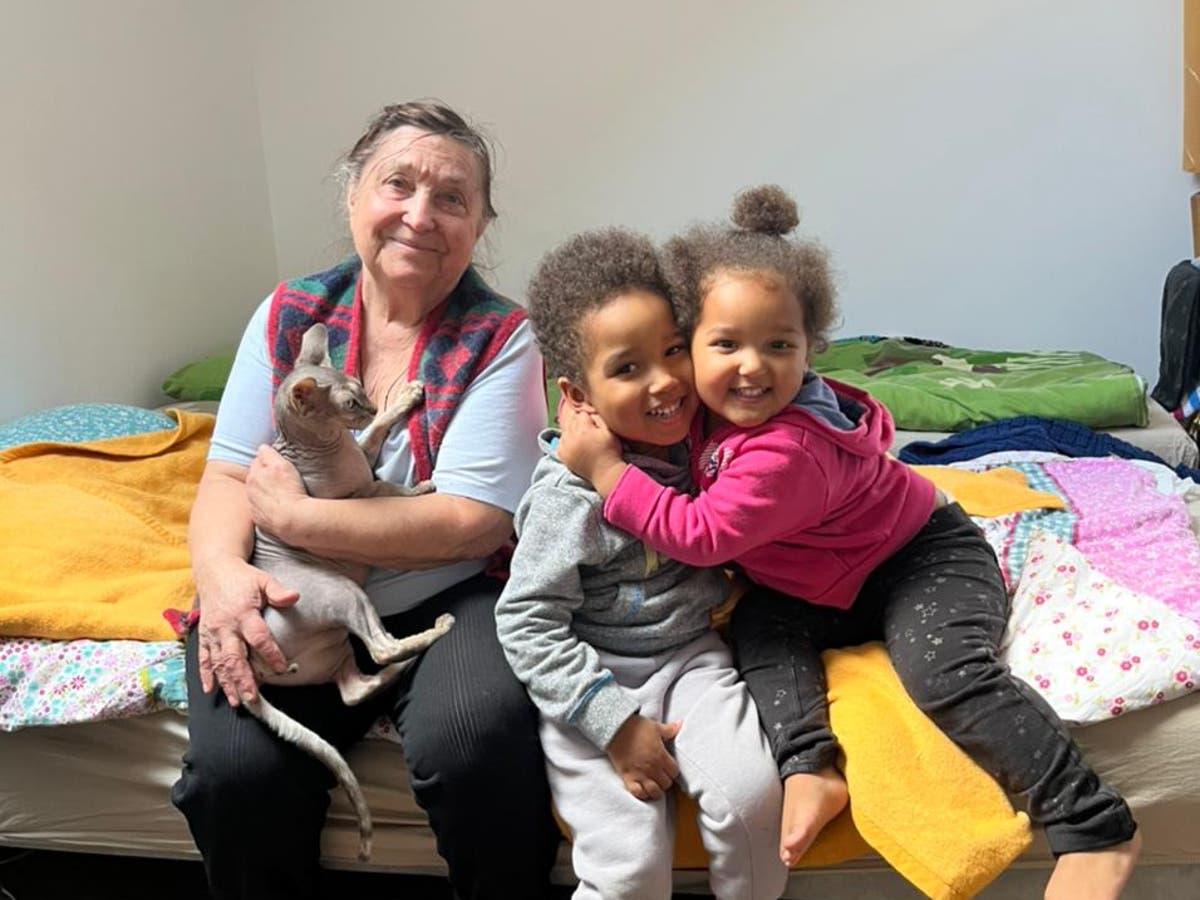 Two boys rescued from besieged territory in Ukraine have been waiting for weeks to be reunited with their British parents, which their father says highlights the Home Office’s “terrible” visa system.

Ethan and Emily, aged three and two, lived in a Moldovan refugee camp for two weeks and had been sleeping in a Romanian church for almost a week pending their visas, despite the fact that their mother and father, Olga and McDonald Majawala, had British Visas in their homes. under the family scheme.

The brothers had been living with their grandparents in the southern Ukrainian city of Kherson, 340 miles (547 kilometers) from home, when Vladimir Putin’s invasion began.

Her parents, who were at the family home in Kyiv, traveled to the border, where they had planned to meet their children and Olga Majawala’s 74-year-old grandmother, Hannah Reznichenko.

But the Kherson railway station and airport were seized by Moscow troops on March 2, and it was almost impossible to find fuel, so grandmother and young son can’t get out of town.

The couple was unable to enter the city to pick up their children. They applied for visas under the UK Ukraine family scheme to join McDonald’s father Majawala, who is based in the UK. When the visa was granted, her children were still stranded.

They left for England on March 15 and moved into temporary accommodation in Deptford, near his father’s house.

On March 19, the couple went to Romania to pick up their children. McDonald Majawala, a citizen of Zimbabwe, was denied entry into the country because he did not have a Ukrainian passport, so he had to return to the UK.

Thanks to information on social networks, the couple found a route out of Kherson, and Olga’s parents, Hannah Reznichenko and children managed to get out and drive to Odessa.

From there, Olga, 31, drove from Romania to Moldova and Ukraine to meet them near the border. His parents chose to live in Ukraine and he took the children and his grandmother to Moldova.

“We are very happy when we meet the children. We thought it would take two or three days to get their visa, considering we submitted our application on March 3,” said McDonald, 29.

“The UK government changed the system so you don’t have to go to a visa application centre, so we had to reapply by March 16 but we thought it would be quick.”

But a week passed and they didn’t accept the decision. Olga, the children, her grandmother and the family cat stayed at the refugee center in Moldova while they waited.

Olga said: “They fed us there, but hot water was a problem because there was never enough for everyone, so we had to get up at night to shower and heat water for the kids and wash them in the sink. .”

Hoping all the visas would arrive by March 30, McDonald booked a flight from Romania to the UK for the day and the family flew to Romania.

Emily’s visa arrived on March 29, but Ethan and Grandma’s visa had not arrived at the time of the flight, so they were unable to travel.

Eleven days later, they were still in Romania, living in a room behind a church.

Speaking from church with her crying children in the background, Olga said: “Every day is the same. Children cry because of lack of sleep. They are tired of being in the same place.

“Romanian people are very friendly. They tried to help us get what we needed but we were still on our way. I can’t get my clothes out of the trunk. I always keep it there because we can finally leave tomorrow.

“I want to quit and be able to live somewhere, restart my life, but I can’t relax.”

Ethan’s visa arrived on April 5 after McDonald contacted local lawmakers, who sent a letter to the Home Office. But they continue to wait for a decision on Reznichenko’s request.

Olga added: “I couldn’t leave my grandmother, so we had to keep waiting.

“This doesn’t look like help from the British government. Aid should mean emergency, but they treat this visa as standard. This is not a standard situation. They should fix this problem, hire more people or something.

“Ethan is very intelligent and asks a lot of questions. He always asks me when we will meet dad. The whole time I told him that every step we took was for him to see his father, but I had no answer.

McDonald stated: “This is the 47th day I don’t see the kids, and the 18th day I don’t see my wife. Nothing is resolved here, so maybe the best way is to wait together, or forget about England and wait in Poland in the hope that everything will work out and we can return to our country.

“We all want to be together. Now I’m thinking, what is plan B? I can move back to Poland. There are refugee centres, people are offering houses. I think we’ll find something.”

The father-of-two, who runs a small business with his wife in Kyiv, described the Interior Ministry’s approach to family scheme visas as “terrible”.

“You propose as a family, but they look at each member individually, ignoring the fact that they are traveling together. They do not take into account family ties. It’s the worst thing you can do at this time and in these circumstances.”

“The Ministry of Home Affairs needs to act better. I feel that my family is not accepted. My mental health is not good at the moment. The only thing I need right now is to be with my family, my children.

“I kept telling myself that it would only be a few more days, but now the days have turned into weeks. The tide is against us […] If I get nothing on Wednesday, I will go to Poland.”

A government spokesman said: “In response to Putin’s barbaric invasion, we have launched one of the fastest and largest visa schemes in British history. In just four weeks, more than 40,000 visas have been issued for people to rebuild their lives in the UK through the Ukraine Families and Homes for Ukraine Scheme.

“We are continuing to accelerate visa processing across both schemes, including increasing social workers and streamlining forms, and we expect thousands more to arrive via this unrestricted route.”