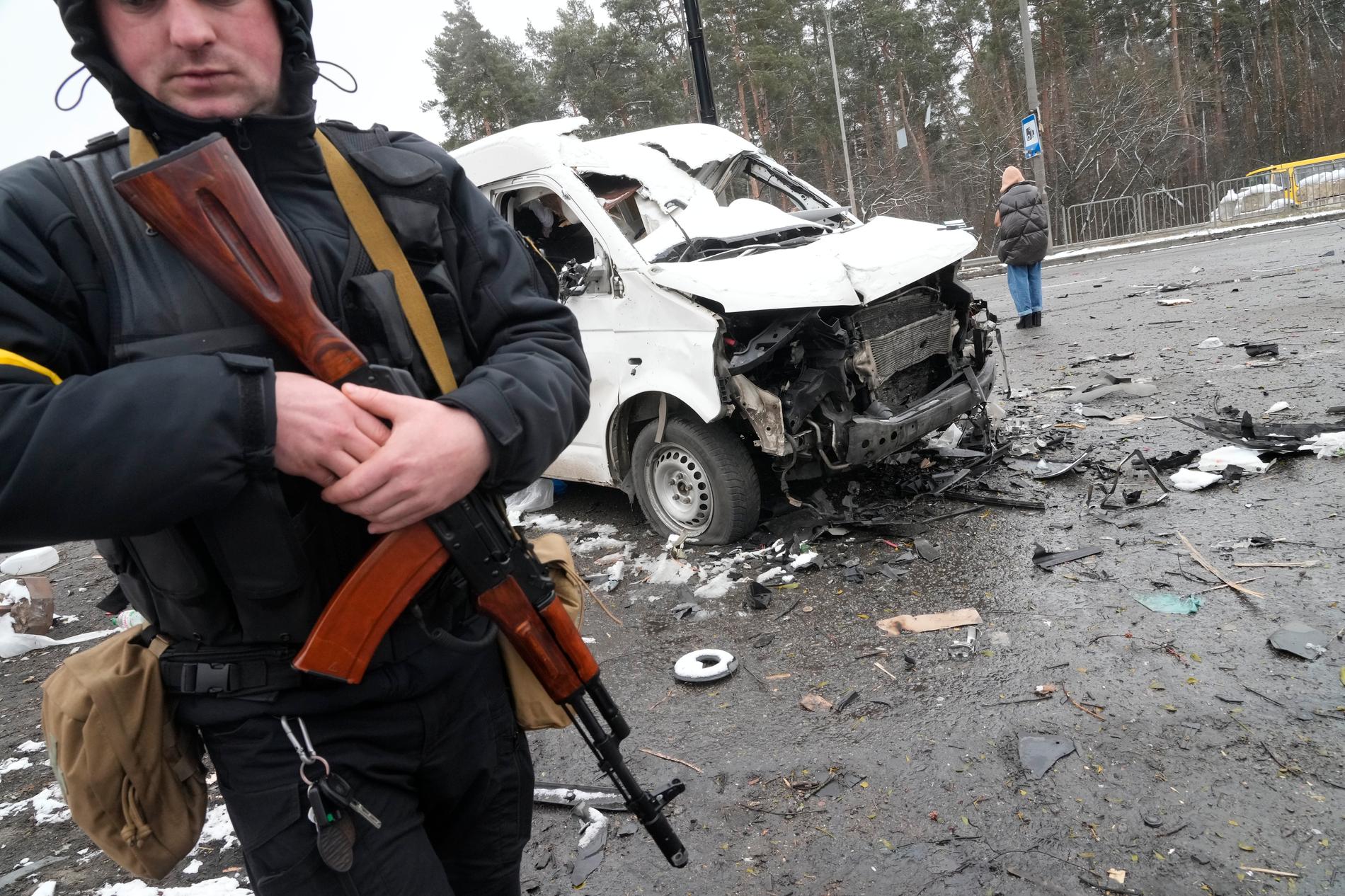 Russian attacks on Ukrainian cities demand more lives. The war soon sent 1.7 million people on the run, and it was feared that Kyiv would soon fall.

Less than 40 minutes ago

On Tuesday, Russian troops struck a target in the center of Ukraine’s second-largest city, Kharkiv, in which at least ten people, according to local rescue crews, were killed.

According to the BBC, the target of the attack was a public building in Frihetstorget, where the government in the region is located. The attack was caught on video and showed a rocket hitting the front of the building.

– It won’t be forgotten. This is state terrorism on the part of Russia, President Volodymyr Zelensky said in a commentary.

On Monday, eleven people were killed in an attack in Kharkiv, according to Ukrainian authorities.

On Tuesday morning, Ukrainian authorities claimed that Russia was no longer the only country with troops inside Ukraine.

– Belarusian soldiers are in the Chernihiv region, a member of parliament wrote on Twitter.

This was later confirmed by Estonian Prime Minister Kaja Kallas.

At a joint news conference with NATO Secretary General Jens Stoltenberg and British Prime Minister Boris Johnson, he said that Belarus now appears to be the “joint attacker” in the conflict.

A suspected Russian attack on a TV tower in Kyiv caused some Ukrainian TV channels to go black, Ukraine’s Interior Minister announced on Tuesday afternoon. Five people were killed and five others injured in the attack, according to Ukrainian authorities.

A photo shared by the Interior Ministry showed thick plumes of smoke rising from part of the tower, but the construction itself should not have been demolished.

A backup solution was implemented to restore broadcasts to TV channels.

According to the AP, about 70 Ukrainian soldiers were killed in a Russian artillery attack on a military base in the city of Okhtyrka, between Kharkiv and Kyiv on Tuesday.

The city of Mariupol also came under a new attack and was without power on Tuesday morning. The city lies near separatist-held areas in eastern Ukraine and is the last major port under Ukrainian control in the Sea of ​​Azov.

The leader of Russia-backed separatists in the breakaway republic of Donetsk, Denis Pushilin, said his troops would surround Mariupol during the day.

Russian tanks also rolled into the outskirts of Kherson in southern Ukraine on Tuesday, where the Russian army, according to the mayor, had erected roadblocks and controlled all traffic in and out of ground troops.

However, despite widespread attacks on airports and military installations, Russia has not yet taken full control of its airspace, according to British intelligence.

– Russia has failed to take control of the airspace over Ukraine, which has led them to turn to operations at night to reduce losses, it said in an update posted on Indonesia.

Seth Jones at the Center for Strategic and International Studies in the US believes that Russia has too little power in Ukraine to be able to control the country.

– If you count 150,000 Russian soldiers in Ukraine and a population of 44 million, that’s a power ratio of 3.4 soldiers per 1,000 people. You can’t defend territory with numbers like that, says Jones CNN.

The advance of Russian troops into Kyiv has stalled in recent days, but all indications are that things were calm before the storm.

Satellite image of the private American company Maxar, reproduced by among others BBC , reportedly shows a Russian military column more than 60 kilometers long now approaching the city. The attacks will continue, the Russian side said.

“The Russian armed forces will continue their special military operations until we achieve all our targets,” Defense Minister Sergei Shoigu said at a news conference in Moscow on Tuesday.

According to Shoigu, the aim remains to “demilitarize and de-Nazify” Ukraine, as well as to protect Russia from “military threats created by Western countries”, the same reasons President Vladimir Putin said when he announced that Russian troops would move. into the country.

At least 102 civilians have been killed, according to UN human rights chief Michelle Bachelet, and more than 300 have been injured since Russia attacked, but she warned, saying the number was likely to be much higher.

How many soldiers on both sides died is unclear. Spokespeople for Russia and Ukraine both claimed that the other side had suffered heavy losses, but the information could not be independently confirmed.

As Russia progresses, the suffering of the civilian population and humanitarian needs in Ukraine is increasing hour by hour.

According to the United Nations High Commissioner for Refugees (UNHCR), 660,000 people have fled to neighboring countries in the past six days, while at least 1 million have been internally displaced in Ukraine by hostilities.

– The number is increasing exponentially. At this rate, the situation looks set to be the biggest refugee crisis in Europe this century, said UNHCR spokeswoman Shabia Mantoo.

Aid organizations like the Red Cross are fighting against time to come to the rescue of refugees, which is especially difficult in Ukraine.

– People are seeking refuge in basements, where many now lack basic necessities, such as food and water. It’s too dangerous to move outdoors for them to get what they need, said Martin Schuepp, who heads the International Committee of the Red Cross (ICRC) in Europe.

Refugees who have reached neighboring Ukraine are easier to reach for aid organizations, but the numbers are staggering.

– The influx of refugees and the need is enormous, and they are likely to increase, both inside and outside Ukraine, said Birgitte Bischoff Ebbesen, who heads the activities of the International Federation of Red Cross and Red Crescent Societies (IFRC) in Europe.

– It’s heartbreaking to see so many personal tragedies. There is no end in sight to this conflict, and it is not at all certain when the refugees will be able to return home, he said.

On Tuesday, the ICRC and IFRC asked for NOK 2.4 billion for their relief work in Ukraine and among Ukrainian refugees.

Want to increase the pressure

The outside world’s increasingly harsh punitive measures against Russia, as well as promises of arms deliveries, do not appear to have deterred Russia from backing down.

Monday’s five-hour negotiating meeting between Russian and Ukrainian envoys in Belarus also did not result in a truce, but the parties at least agreed to meet again in the coming days.

Ukrainian President Volodymyr Zelenskyj believes pressure on the Kremlin should be increased further and on Tuesday proposed that Russia be removed from the UN Security Council.

“A country that commits war crimes against civilians cannot be a member of the UN Security Council,” he said in a video shared on social media.

On Tuesday, he also followed up in a video speech to the European Parliament, which held an emergency meeting in Brussels, and asked, among other things, that Ukraine be approved as a candidate country immediately. This is a requirement supported by Bulgaria, Czech Republic, Estonia, Latvia, Lithuania, Poland, Slovakia and Slovenia.