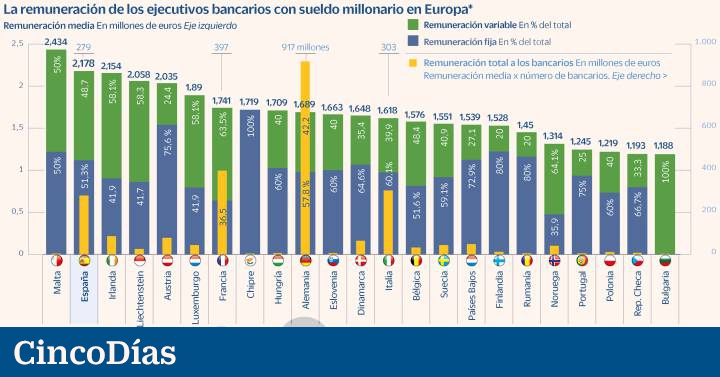 Spanish bankers with millionaire salaries in 2020 on average are the best paid in Europe. In total, that year there were 128 senior banking managers who received an average of 2,178 million euros between fixed and variable remuneration, according to a report conducted annually by the European Banking Authority (EBA, for its acronym in English) at the best-paid bankers in the world. eurozone.

According to this document, this is the highest figure in any European country. To illustrate, and taking into account data from comparable financial systems, in France there are 228 bankers who pocket an average of 1,741 million (20% less than in Spain). Similarly, in Germany 543 bankers with millionaire salaries earned an average of 1,689 million (22.45% less than Spain) and in Italy there were 187 bankers who earned 1,689 million (25.71% less).

In the classification, only Malta appears above Spain in the average remuneration of its senior banking executives, but in his case it only corresponds to a banker receiving 2.4 million, so it’s not really average.

Although European authorities did not provide the identity of the bankers or the names of the entities paying these salaries, the report did not detail the portion of the remuneration received. In this way, 74 Spanish bankers receive between 1 and 2 million euros, another 25 receive between 2 and 3 million and 18 senior managers between 3 and 4 million.

On top of this salary, there are 7 Spanish bankers who receive between 4 and 5 million euros, while the other two receive between 5 and 6 million. At the top of the salary scale, a manager earned 6.3 million and the highest-paid banker in the Spanish banking sector earned 7.4 million in 2020.

When it comes to the rest of Europe, the highest paid senior manager is a French banker, with €11.1 million. In second place, an Irish executive, with 9.8 million, and the podium is filled by a German banker with 9.4 million.

The financial year 2020 coincides with a special period in terms of bankers’ remuneration, as due to the pandemic, in most cases senior executives are ignoring bonuses and part of the variable remuneration in accordance with the recommendations of the European Union Central Bank (ECB) to implement a more conservative remuneration policy to preserve capital.

In this case, the number of bankers who received at least one million euros was greatly reduced. In 2019 in Spain there were 163 bankers with millionaire salaries, while in 2020 the number was reduced to the 128 mentioned above.

In Europe as a whole, the decline was more pronounced. That went from 4,963 bankers with salaries of at least one million euros in 2019 to 1,383 (-72%). However, it should be taken into account that in 2019 the figures for Great Britain, which accounted for 71% of millionaire senior executives, also contributed to the decline in the total number of high-paid bankers.

With regard to remuneration issues, financial entities are subject to certain European and national regulations, unlike other publicly traded companies which only have recommendations based on good governance policies, according to KPMG.

Several requirements in this regulation relate to the demand that banks have a remuneration policy that is not discriminatory in terms of gender. Similarly, the regulations stipulate a requirement that bankers who receive a share of their variable remuneration in the entity’s shares, will have a minimum retention period of two years.

However, the regulatory body may not impose a limit on the remuneration of bankers beyond the requirement that the variable salary should not exceed 100% of the fixed remuneration or 200%, if approved by the general meeting of bankers’ shareholders.

In the case of banks with public assistance, there is indeed a limitation on executive salaries. In this case, Bankia, before being absorbed by CaixaBank, was the Ibex 35 entity that paid the least to its senior managers.