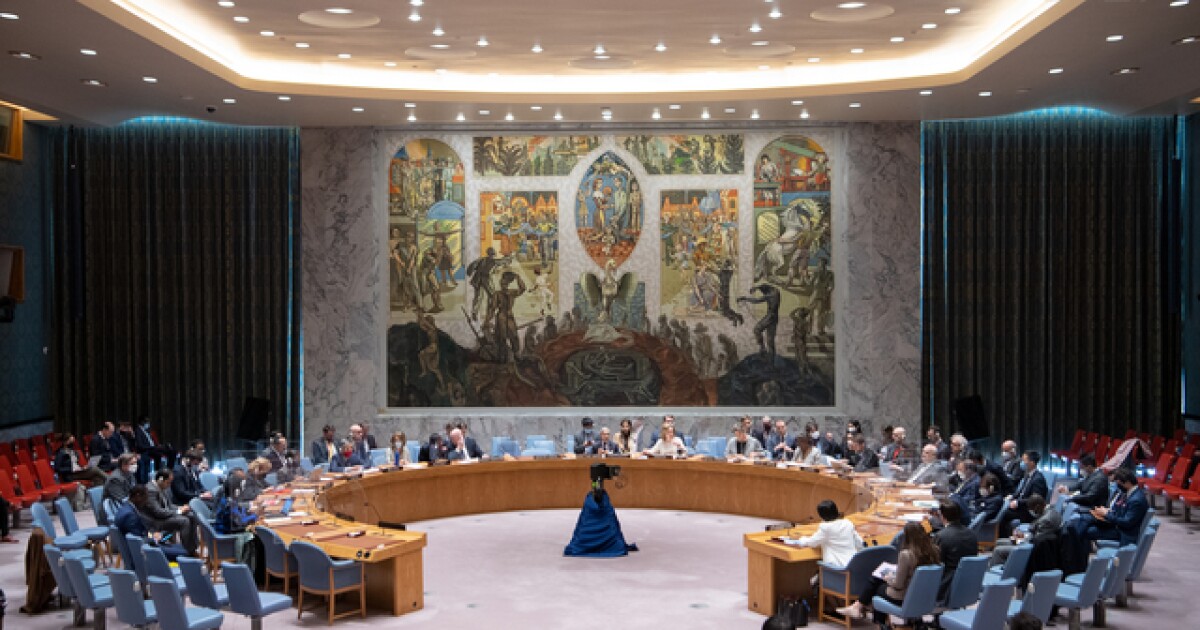 Western powers clashed again this Friday with Russia and China at the United Nations Security Council over alleged “biological weapons” which Moscow says Ukraine is developing on its soil.

The United Nations’ top agency discussed the matter again today at the request of Russia, which took the matter to the Security Council last week, in a move the United States, France and Britain described as a “weird conspiracy theory”, “campaign disinformation”. ” or “amateur repetition”.

As he did on Friday, March 11, Russia’s ambassador to the United Nations, Vasili Nebenzia, insists that he has new evidence showing that the United States and Ukraine are collaborating on the development of biological weapons.

“The Russian Ministry of Defense found more evidence to suggest that the Ukrainian authorities implemented biological projects for military purposes under the direct supervision of the United States,” said Nebenzia, who did not share the evidence.

In a 15-minute speech, Russian diplomats discussed the alleged plot and listed several Ukrainian laboratories that Russia said were involved in the test.

The UN High Representative for Disarmament Affairs, Izumi Nakamitsu, as she did a week ago, reiterated that “the UN has no knowledge of the biological weapons program” in Ukraine, but pointed out that the UN “does not have the technical or operational mandate or capacity to investigate that information.”

RANKING OF THE WEST POWER CLOSING

In almost the same meeting as the previous one, the United States Ambassador, Linda Thomas-Greenfield, once again emphasized that her country’s aid to Ukraine was transparent and she was proud to help them.

“There are no Ukrainian biological weapons laboratories near the Russian border, or anywhere else. There are only public health institutions, and I can say with pride, that are supported and recognized by the United States government, the World Health Organization, and other governments and international agencies,” the diplomat said.

But Thomas-Greenfield went a step further and accused Russia that its accusations could be a strategy to justify future chemical or biological attacks against the Ukrainian people.

The thesis also shared by the French representative, Nicolás de Riviere: “France is deeply concerned about the possibility that this disinformation campaign is a prelude to the use of chemical or biological weapons in Ukraine.”

The US, UK, Norway, Ireland, Albania and France, which delivered the loudest speeches against Russia, showed their firm alignment with the joint statement read out before the meeting by Thomas-Greenfield, who appeared accompanied by representatives of other countries.

On the other hand, and as was the case in last Friday’s session, where this issue was already discussed, China reiterated its support for Russia’s accusations and said that “any information and hints about biological military activities should generate greater attention and concern from the international community.” .to prevent irreparable damage.

“Russia has also disclosed relevant documents that were recently discovered. Relevant parties should respond to inquiries and provide timely and comprehensive clarification to dispel the doubts of the international community,” said Chinese Ambassador Zhang Jun.

Other countries on the Security Council are more moderate, without supporting Russia’s accusations, but not to the point of calling them a “joke” or a “smoke screen” and limiting themselves to generally condemning the use of chemical or biological weapons. , except for Gabon, which insisted that Russia’s accusations should not be “took lightly”.

“We believe that any issues related to obligations under the Biological Weapons Convention should be dealt with in accordance with the provisions of the convention and through consultation and cooperation between the parties concerned,” said the Indian representative, urging an immediate halt. hostility and respect for the sovereignty and integrity of the state.

For its part, Brazil pointed out that such “very serious” allegations must be “fully based on solid evidence” that must be brought before an independent and impartial authority that must confirm them, signaling its opposition to Russia taking the matter to the highest level. the body of the ONU.

A position shared by Mexico, which indicates that the Biological Weapons Convention should be the instrument for solving this kind of problem.