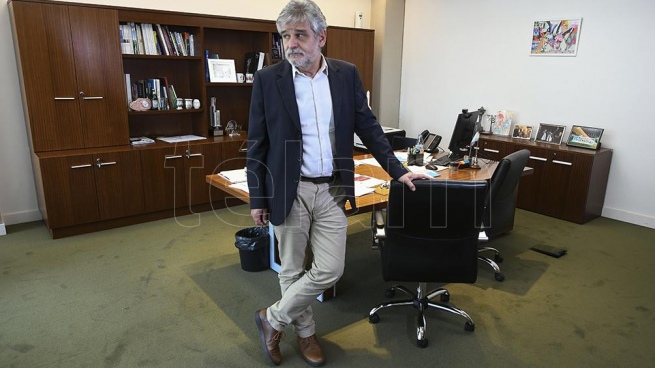 Minister of Science, Technology and Innovation, Daniel Filmus, who is the secretary of Malvinas, Antarctica and South Atlantic, is highlighted today “lack of international support for colonial policies” Great Britain and celebrate instead “ratification of all multilateral organizations against Argentine claims to the Malvinas”, while warning that, within the framework of the dialogue expressed by Argentina and promoted worldwide, “the ball is on the pitch in England”.

“Tell me what you are proud of and I will tell you what you are lacking”Filmus took notes, remembering that “in his New Year’s Eve greeting to the islanders (British prime minister) Boris Johnson celebrates the participation of the Malvinas team in the ping pong championship “.

“Several times the British Government has openly and brusquely acknowledged the lack of international support that its colonial policies had. 2021 is a year in which all multilateral organizations emphasize their support for Argentina’s claim to the Malvinas”, the official said in his statement to Télam.

Filmus highlights that this support is expressed “regional organizations, such as OAS, Celac (including Commonwealth member states), Mercosur, Parlasur, Parliament of Central America”.

“But it was also unanimously stated by the UN Decolonization Committee and China’s G77+, which brings together 133 countries from all continents.” emphasized.

It says “After Brexit, the European Union left Malvinas, Georgia and South Sandwich out of free trade agreements with the UK. At the same time, the UK suffered severe setbacks to its colonial policies at other latitudes by the International Court of Justice, as in the case of the Chagos Islands”.

In his recent Christmas message to islanders, Johnson said, among other things, that “After all, 2021 is the year that even the International Table Tennis Federation recognizes, with strong protest by some, the inviolable sovereignty of the Falkland table tennis players.”

Filmus answered that “In the context of his rejection of his colonial strategy, celebrating a ping pong match only highlights his alienation. However, this sport’s justification refers to a lucky event that occurred in the early ’70s decade. It went down in history as ‘Ping-Pong diplomacy'”.

And he added: “Welcome to saving Boris Johnson from the sport if he serves the British government, 40 years after the war (for the Falkland Islands) will continue dialogue with Argentine democracy for the restoration of the exercise of our sovereignty over the Malvinas in a matter that has been demanded by the United Nations and the International community since 1965, the year the General Assembly approved Resolution 2065 ( XX) . Argentina has permanently expressed its willingness to dialogue. The ball is on the pitch in Great Britain”.