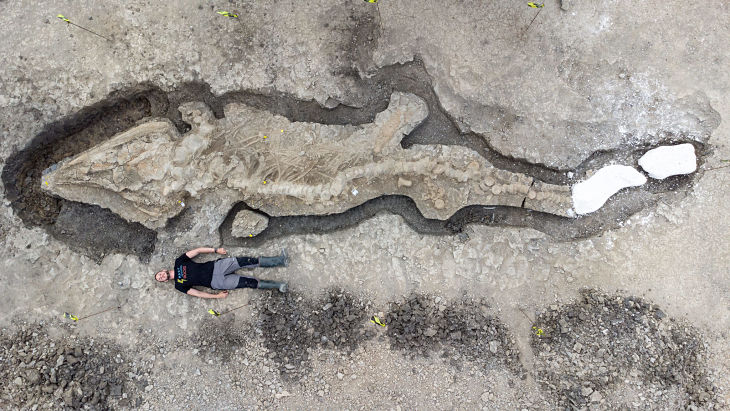 Year after year experts from all over the world have managed to unravel some of the mysteries of Earth. From mummies to megacities and the continuous discovery of animal fossils continues to conquer lovers of creation and extinction history.

For the first time an expert has found a fossil of an ichthyosaur, also known as the “Sea Dragon”, it is the largest ever found in England and excavated in Reserva Natural de Rutland Waternear Leicester.

This species is more than 180 million years old and scientists say it will be one of the largest found, due to its length of 10 meters, in addition to its complete skeleton.

The find was made by Joe Davis of Leicestershire and the Rutland Wildlife Trust who said it was a fluke, as he was working on landscaping in the area. “I know that a lot of people have spent their lives looking for something like this and I was very lucky to find it”commented to New Scientist.

I also want to say thank you @anglianair, @RutlandWaterNR, @LeicsWildlife and @rutlandcouncilespecially Joe Davis, Joelle Woolley, Jake Williams, Claire Hornsby, Robert Clayton and Ari Volanakis for all their hard work and enthusiasm in helping to make this happen! pic.twitter.com/QWS080vhbm

LATEST LOCAL NEWS!
On our hourly news from 6am and Rob Persani chatting to Joe Davis from the Reserve after 8am!
Britain’s most complete ichthyosaur skeleton has been found @RutlandWaterNR
This 10 meter long ‘Sea Dragon’ would have lived 180 million years ago. pic.twitter.com/ReRFhfF1tX

Some experts insist that this fossil is the first of its kind, Temnodontosaurus trigonodon, to be found in England, because they explain that this type of fossil is usually found in North America and Germany.

The excavations were led by Dean Lomax of the University of Manchester, who also added: “This is a truly unprecedented discovery and one of the greatest discoveries in the history of British paleontology.”

What is known so far about this species is that the ichthyosaur was an apex predator and it is believed that it was part of a group of animals that probably had the largest eyes of all known vertebrates, as they could measure it at least about 20 centimeters in diameter.

Around 1811 the first discoveries of ichthyosaur fossils were made, thanks to Mary Anning’s excavations at Lyme Regis in Dorset. @worldly