In a work articulated with the National Geographic Institute (IGN) -scientific bodies that depend on the Ministry of Defence-, Malvinas Secretariat, Antarctica and South Atlantic -depends on the Argentine Ministry of Foreign Affairs- and National Commission for Space Activities (CONAE) in the orbit of the Ministry of Science, Technology and Innovation, two new cartographic products for the general public: Malvinas Topographic Maps and Satellite Imagery.

This product shows the Malvinas Islands as seen by Argentina’s CONAE satellite SAOCOM 1A, which together with its sister SAOCOM 1B, is a constellation of two satellites with a polarimetric L-band synthetic aperture radar (SAR) instrument.. The observation capabilities of SAR radar are numerous and very few in the world have similar characteristics. It is useful for agriculture, emergencies, environmental, monitoring and surveillance at sea and on ice, among many other applications of socio-economic-environmental impact both for our country and for other regions of the world. In this way, through remote sensing, there is also a permanent presence throughout the territory of Argentina and that is a vivid example of National Sovereignty.

In the inter-ministerial initiative “Malvinas Agenda – 40 years”, which aims to make the Malvinas Question visible in the country and in the world, IGN designed a new special edition cartographic productwhich contains historically relevant information about our legitimate sovereign rights over the Malvinas, South Georgia, the South Sandwich Islands and related maritime and island spaces, as well as diplomatic claims that Argentina continues to make before international organizations.

This map is designed at a scale of 1:500,000 and, on the one hand, contains traditional information from topographic maps (names of places, streets, cities) and, on the other, integrates text and images that refer to various milestones that explain Argentina’s sovereign rights over Malvinas, South Georgia, South Sandwich Islands and associated maritime and island spaces. 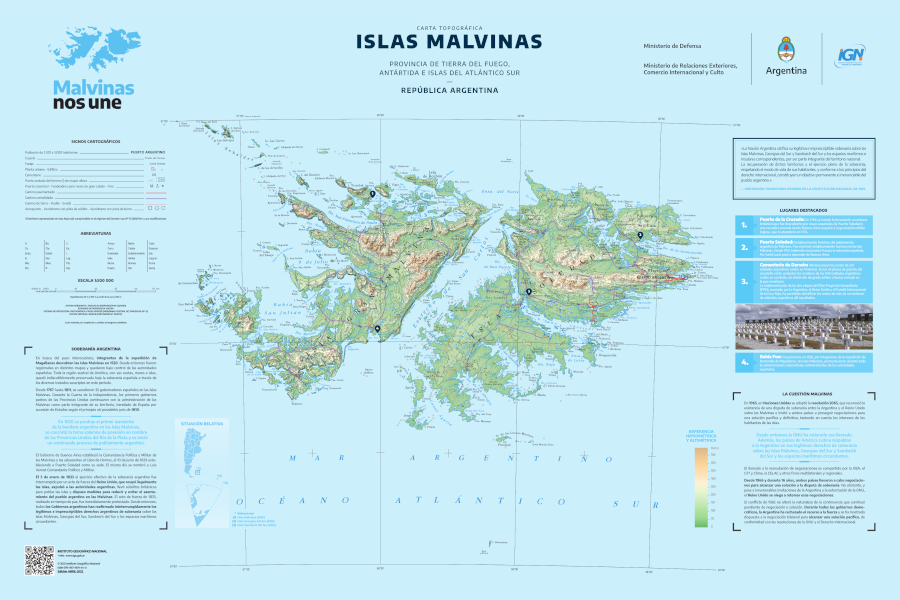 Both products are made with a scale of 1:500.00 with a print size of 85 cm x 50 cm. Topographic maps provide geospatial updates referring to toponyms, buildings, and coastlines. The topography was also replaced with the latest version of the Digital Elevation Model (MDE-Ar) from IGN, including contour lines, shadow models and hydrographic networks.

Additional information contained in both products includes references, among others, to the discovery of the Islands in 1520, the first raising of the Argentine flag in 1820, the unlawful occupation by Britain in 1833, the conflict of the South Atlantic in 1982, as well as national claims to the full exercise of his sovereignty and international diplomatic career during his reign. democratic. The implementation of the Humanitarian Project Plan (PPH), signed by Argentina, the United Kingdom and the International Committee of the Red Cross, was also reflected, which allowed the bodies of more than a hundred Argentine soldiers buried in Darwin Cemetery to be identified. .

Through the articulation of the Ministry of Defense; Foreign Relations, International Trade and Worship; and Science, Technology and Innovation, A set of products has been achieved that will allow a better understanding of the important parts of our territory taken by foreign powers, complementing geospatial and cartographic information with its history and environmental characteristics.