“There is no just or holy war,” Francis said. 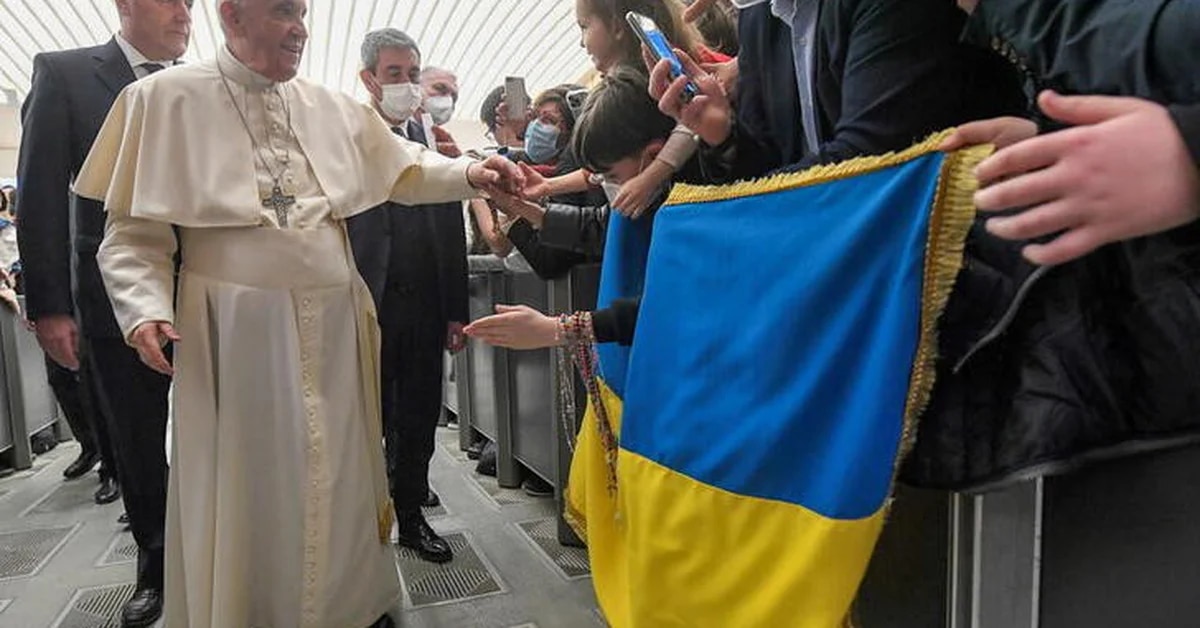 Pope Francis waves to people with Ukrainian flags during his weekly general audience in the Paul VI Hall of the Vatican. March 16, 2022 (Vatican media/delivery via Reuters)

“The Pope invites bishops from around the world and their priests to join him in praying for peace and in consecrating and entrusting Russia and Ukraine to the Immaculate Heart of Mary,” said the director of the Holy See Press Office, Matteo Bruni.

The Pope will say a prayer on the afternoon of Friday March 25, the Feast of the Annunciationin St. Peter’s Basilica at 17.00 (13 in Argentina). The same action, on the same day, will be carried out by all the bishops of the world.

Already in Angelus on March 13th, The Pope has invited the whole Church to pray: “I ask all dioceses and religious communities to increase prayer times for peace.” At a general audience on February 23, he called for a day of prayer and fasting for peace in Ukraine on Ash Wednesday, declaring: “May the Queen of Peace save the world from the madness of war.”

PRESS, STATION LVIV AND AFTER

As the Pope announced celebrations next Friday, crowds packed into the picturesque train station in the Ukrainian city of Lviv, most of them waiting for the train to stop at platform number 5 for those departing. to Poland fleeing the war. At noon this Friday, two well-known international journalists crossed paths, one from local and the other from Latin America, and after confessions and greetings from two colleagues who had not seen each other in years, the following dialogue ensued: the unwise witness told the writer this history. The Ukrainian asked another: “Are you going to Rivne?”, to which the second one replied: “No, we are going to kyiv!” Then the first, in a damning tone, He replied: “Why did you lie to me? You told me you were going to kyiv so I believed you were going to Rivne, but actually you are going to kyiv!”

This dialogue reveals a high degree of change. How political liars pollute the freedom of the press. It is enough to watch and watch the scenes and their repetition to realize the partial view with which tele-tech embodies the memory of war. But it is another war contributing to the army and for your information we refer to those who are dedicated to media ecology.

WHAT RUSSIA AND UKRAINE DISCOVER IN THE “PEACE PLAN”

This week it became known that at the negotiating table between representatives of the two governments were fifteen points to achieve peace the most important are as follows.

Ukraine’s refusal to join NATO and host foreign military bases in exchange for receiving protection from countries such as the United States, Turkey or the United Kingdom;

Ukrainian acceptance of neutrality and demilitarization status in Austrian or Swedish style;

Confession Crimea as the territory of Russia and the independence of the new republic of Donbas.

Appointment Economic sanctions to Russia and the right to use the Russian language in Ukraine.

On July 13, 1917, the Virgin (who has always been the same and historic Mary, Mother of God) in one of her apparitions, at Fatima, asking for the consecration of Russia for her Immaculate Heart, stressed that if this request is not granted, Russia will spread “its guilt throughout the world, promoting war and persecution…” “The good – he added – will be martyred, the Holy Father will suffer a lot, several countries will be destroyed”. Let us remember that Fatima’s prophecy has been fulfilled.

After the apparition and announcement, there were several acts of consecration to the Immaculate Heart of Mary: Pius XII, on October 31, 1942, consecrated the whole world and especially Russia. Paul VI did so in 1964 and John Paul II in 1981, 1982 and 1984 renewed this consecration. Pope Wojtyla, remembering the request of the Virgin at Fatima, on March 25, 1984, in St. Peter’s Square, in spiritual union with all the bishops of the world, entrusting all peoples and nations to the Immaculate Heart of Mary.

On March 25, Pope Francis will consecrate Russia along with Ukraine to the Immaculate Heart of Mary in fellowship with bishops around the world praying for peace.

THE HOLY FATHER AND THE PATRIARCH OF THE RUSSIAN ORTHODOX CHURCH

On Wednesday, Pope Francis and Patriarch Kirill, of the Russian Orthodox Church, held a virtual dialogue. They agreed that, “(as) the shepherds of the same saints who believe in God, in the Holy Trinity, in the Holy Mother of God, we must unite in our efforts to help peace, to help those who suffer, to seek the way of peace, to stop fires … to contribute to the strengthening of peace and justice”.

The Pope emphasized that “As pastors, we have an obligation to be close to and help all those who are suffering as a result of war. There was a time when our churches were still talking about holy wars or just wars. Today, we can no longer talk like this. Christian awareness of the importance of peace has grown…War is always unfair. Because God’s people are paying. Our hearts can only cry for the children, for the women who were killed, for all the victims of war. War is never the solution…”

The Christian-inspired DIP supported the concept of a “just war” in antiquity and both patristic theologians and St. Thomas support it with conditions and limitations which, due to the broadening of the subject, we cannot express here. The western world restricted the right to war, especially after Vietnam which killed 1,000,000 people. In recent decades, jurists such as Anglo-Saxon Michael Walzer acknowledged a “just war” but despite this, they condemned the war in Iraq which killed 900,000 people and two in Libya and there has been much discussion about what in Afghanistan NATO declared against terrorism. according to that qualification. There is no doubt that the war in Syria, with nearly 500,000 deaths and millions of displaced people, which is in Lebanon, Palestine and which still prevails today such as the one in Sabel (Mali), Yemen, which had 233,000 deaths in 8 years and 4,000 0,000 were expelled, civil war in Burma, Myanmar and ethnic cleansing of the Rohingya in which there are more than 700,000 Muslims killed or expelled, thousands of refugees, from Ethiopia in the Tigray Region, ethnic cleansing of the Tigrayans (number unknown) They are some of those who, in a true “third world war”, some, as the Pope puts it, spread horror and death.

The current Russian invasion of Ukraine, with its good casualty record in recent days, though not as large as the previous one, is equally reprehensible but it moves the world more because it puts it on the brink of an escalation of conflict between Russia and the European Union capable of turning into a nuclear fire that brought the end of planet earth.

ONE CRIME IS NEVER UNDERSTANDED WITH ANOTHER CRIME

To justify international aggression, others may be accused of using war on their side, but Francis, in declaring that “war is always unfair”, does not recognize exceptions. And it does not recognize them beyond the reason that discovers it, because evil is always suffered by people. And because one evil cannot be overcome by another.

Pope Francis called to stop the invasion of Ukraine with a message to Putin: “Lord, stay in the hands of Cain!”