Jakob Ingebrigtsen: The writing on the left thigh catches the eye 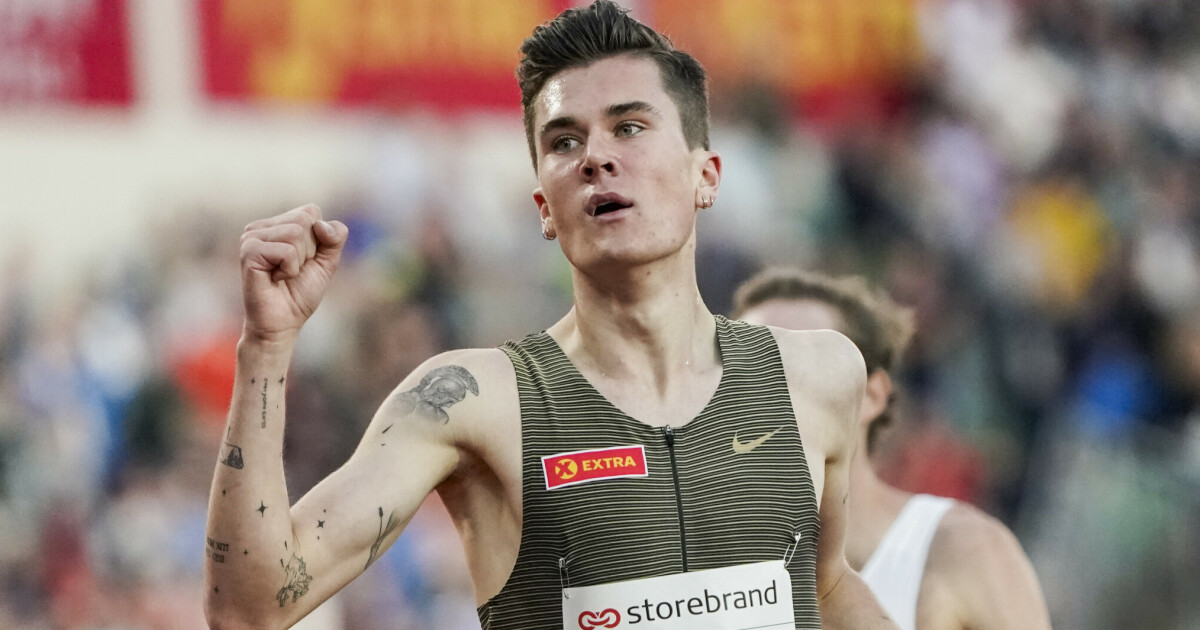 Since childhood, Jakob Ingebrigtsen (21) is a nationally and eventually globally renowned running name. He was crowned the prince of middle-distance running and was a truly unique talent.

When he was 11 years old, he ran so fast that he was subjected to measurements at the Physiological Testing Laboratory at Stavanger University.

10 years later, Jakob Ingebrigtsen is the best in the world.

And it has left its mark on and on the body, literally.

The running phenomenon has received many new tattoos since he wowed the sporting world with an Olympic gold medal in the 1500 meters in Tokyo, specifically on his right arm.

And on the left thigh, the 21-year-old has received a “royal” tattoo that reads: “REX”.

– What does this tattoo mean, Jacob?

– You have to look for him, he answered first.

– Does that mean you’re the king?

– There are several motivations for myself, from many places in the body. “Rex” and “Quick” and a bit of everything I’ve tried to go through, Jakob Ingebrigtsen answered Dagbladet.

– How does this tattoo motivate you?

– It is clear that I worked as hard as I could to be the best runner in the world today and also for centuries. I have been trying this for a long time, and I will continue to do so. “I think it could be great, but there’s a lot of work to be done,” he replied.

Year after year. Day by day.

The story of why the prodigy of Sandnes, now a grown man, became the best in the world, is well documented through the long-standing TV documentary following the Ingebrigtsen family.

– It’s a complex thing. There are many paths to success, but for me it was about purposeful work and structured training from an early age. I try to be in perpetual development. I put my whole life into being as good as I could at running. “I hope to keep it for as long as possible,” Jakob Ingebrigtsen told Dagbladet.

At the same time that Jakob was on a rampage, older brothers Henrik and Filip were struggling. Competitor Narve Gilje Nordås, who differs from the Ingebrigtsen brothers who still have Gjert Ingebrigtsen as coach, played hard at Dagbladet on Thursday night and called Henrik and Filip’s performance “absolutely pathetic”.

However, Jakob is much more positive in mentioning Henrik and Filip.

– How does it feel to see them get into trouble when you fly away from everyone?

– It’s up and down. Philip was the best for a while. Henrik is the best for a while. I have very strong belief that they will come back strong. They’ve made it work well in the last few weeks and months, but Bislett Games came a little too early. This could be interesting next month. I think it could be good, the world champion told Dagbladet.

– Are you the best in the family for life now or is there a theoretical possibility that they can beat you again?

– We’re all doing the best we can and trying to improve, then we’ll see how it turns out in the end.

It was Henrik Ingebrigtsen’s older brother who led the way for many years and paved the way with European Championship gold in the 1500 meters in 2012, as well as a very strong performance at the Olympics in London that same year.

Filip Ingebrigtsen took over the baton and became European champion in 2016, followed by what was then a breakthrough result with a bronze medal at the 1500 meters World Cup in London the following year.

Filip was also the best in 2018, before he got injured at the European Championships in Berlin 2018. Then Jakob Ingebrigtsen took his chance and became the best in the family for the first time.

Super talent is also the best in Europe with two European Championship gold medals at the age of 17 in Berlin. And with last year’s 1500 meters Olympic gold, Jakob broke the final barrier that saw him call himself the best in the world.

At the moment, Jakob Ingebrigtsen seems to have the physical and mental advantage over all rivals.

– Did they give up the chance to beat you?

– I don’t think competitors have given up, no. They do their best to be better. I have to make sure to do the same, replied the Sandnes boy, who was happy to win at the Bislett Games:

– This is very cool. It’s a dream to compete during the Bislett Games while you’re in shape.

Jakob and the Ingebrigtsen family have put Sandnes on the map. From the same area, Erling Braut Haaland had put Bryne and Jæren on the famous map.

Both Jakob Ingebrigtsen and Erling Braut Haaland were born in 2000 and are two world stars and unique cases in Norwegian sporting history.

– Who’s the best athlete from Rogaland now, Jakob? Who is the king of sports in Rogaland?

– Overall, we can say that Norway is one of the best sports countries in the world. It’s great to be part of such a wave in Norwegian sport, and it’s cool to show the world that unfortunately they just have to accept that Norway is the best, Jakob Ingebrigtsen replied to Dagbladet.