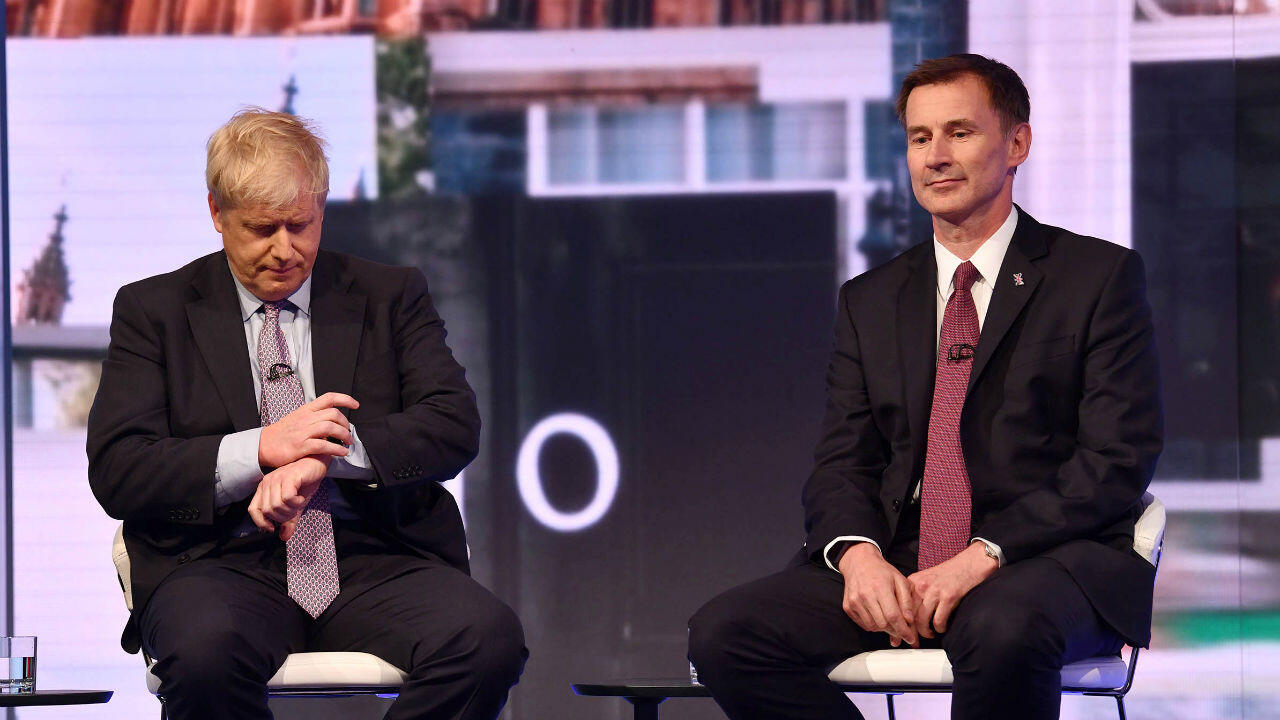 Boris Johnson and Jeremy Hunt are finalists in the race to become British Prime Minister and lead the Conservative Party, replacing Theresa May.

The former mayor of London, Boris Johnson, and the current secretary of state, Jeremy Hunt, are two conservative candidates for the post of prime minister and lead the party. After the resignation of Theresa May, the current Conservative Prime Minister, by not reaching a Brexit deal, the ‘Tories’ are looking for a new face in sight.

Johnson and Hunt are the only two contenders to make it through the first round of selection in the Conservative party. This Thursday, June 20, they are competing in the primaries with the Minister for the Environment, Michael Gove, and the head of Home Affairs portfolio, Sajid Javid. However, the latter two did not receive enough support to stay in the race to replace May.

After this first election, 160,000 Conservative Party militants were called to vote over the next four weeks to elect a new leader from the formation, the results of which will be known at the end of July.

Johnson won the support of 160 Conservative MPs out of a total of 313, while Hunt garnered 77 support, making the former London mayor the favorite to replace May at Downing Street.

Johnson stated that he was “very honored to “receive over 50% of the vote”: “thank you all for your support. I look forward to taking a tour of the UK to explain my Brexit plans, unite the country and create a brighter future for all.”

I feel very honored to have won more than 50 percent of the vote in the last ballot. Thanks to everyone for your support! I look forward to going out across the UK and setting out my plan to make Brexit happen, unite our country and create a brighter future for all of us. pic.twitter.com/i5D4ByurAM

Johnson has become one of the most controversial figures in British politics in recent years: a former foreign secretary and former mayor of London, he is a staunch supporter of Brexit. During the referendum campaign on leaving the European Union (EU) in June 2016, he was one of the faces seen in defense of Brexit.

The 55-year-old politician has vowed to execute him out of the community structure with or without a deal by October 31, a deadline set by both sides as the limit. In fact, it was his commitment to Brexit that led him to resign as foreign minister in June 2018.

Meanwhile, Hunt, 53, has held various positions of responsibility in Conservative government and has had a long political career. Since Johnson’s resignation, he has been responsible for managing Brexit negotiations with the EU.

In June 2016, he defended the option to remain within the community structure. Following the outcome, he pledged to carry out Brexit, and on several occasions he endorsed a negotiated exit with the EU as a priority for the Government.

The political profiles of the two not only differ in their opinions on Brexit, but they also represent different styles: Johnson is presented as a spontaneous and charismatic character, despite the fact that his impulsive character suggests, to some, instability. Hunt, on the other hand, played his experience power card, but failed to generate equal interest among voters.

I’m not the underdog – but in politics, surprises happen as they did today. I don’t doubt the responsibility on my shoulders – to show my party how we deliver Brexit and not elections, but the turbo-charged economy and high-running country of the world

Hunt acknowledged as “most disliked” but recalled that “in politics, surprises happen.” “I don’t doubt the responsibility that rests on my shoulders, to show my party how we got to a no-election Brexit, but also a strong economy and a country that goes with its heads held high.”

May announced her retirement in May.

The current Prime Minister and Conservative leader announced his intention to step down at the end of May this year, having failed to get the UK Parliament to back his Brexit deal with the EU despite three attempts.

May won the general election in June 2017. The leader replaced former Prime Minister David Cameron, who organized the Brexit referendum, as head of state and the Conservatives.

From July, Hunt or Johnson will be responsible for renegotiating the deal to win the support of British deputies.

With Reuters and EFE